I'm a double-surviver. Tough 2021 and 2022 are marked by my ex-husband's harassment and current Russian-Ukrainian war...

In both cases lies, manipulations and demonstration of power against peaceful innocent side have place.

It’s scary when the criminal law defense lawyer, the father of your child, treats you like his personal enemy #1 and does his best to fabricate a case against you. For no reason. For no guilt. Just because you're a mother of his child. Just because he wants to do so and can afford it.

Please, find my story below and consider supporting me and my son.

As my special thanks for any donation of yours, I'll forward you the link for a free download of my "ARIA" album.

My 11-month-old son, Andrew, and I, Olena Karpenko (stage name Solomia), both are Ukrainian citizens. I’m a musician, writer, and cultural diplomat of my nation. I composed a musical play and spent 2.5 years in the USA on a visa for talents (2018-2021).

Andrew’s father is a Yale Law School alumnus, a lawyer licensed in NV and CA. He’s smart, charismatic, attractive, eloquent, tall, and strong. No wonder I fell in love very fast. We started living together. We talked about having family and kids lots of times. We were traveling and enjoying our lives together.

Inspired by love, I created my “ARIA” album in a very short period of just a couple of months (2020).

The fairy-tale ended right at the moment when I told my boyfriend that I was pregnant. “Shit. You’ll have a bastard” – that was his first reaction to the news.

I never asked him to marry me, but gladly accepted his proposal when he seemed to make up his mind.

However, just 3 weeks after we wed, he tried to kick me out of his house in the middle of the night in January 2021: “Get out of here! Buy yourself a ticket and leave! The fact that we’re married doesn’t necessarily mean that we should live under one roof!”

Starting from January, and increasingly to March, his abuse only escalated. His attitude towards me changed from idealization to constant yelling, humiliation, and offense. He named our baby a “mistake”, he called me a “silly piece of shit”. Each time I felt sick he would ask (with hope in his eyes): “Is it a miscarriage?”

In March, during one of his bursts of anger, he shouted: “Buy yourself a ticket and leave!”
I answered: “That wasn’t you who brought me to America. I made it here thanks to my talent and hard work. And that won’t be you who would tell me where should I stay or where should I go”.
He replied: “Right, that wasn't I who brought you here, but it’s I who controls your stay in the USA! I revoke my signature under your [marriage-based green card] documents. Leave!”

This happened just 6 weeks before my working visa expired. I was in my 5th month of pregnancy by then.

I was never exposed to behavior like that in my life. I was psychologically ruined. Very timely, the book, “Women Who Love Psychopaths”  by Sandra Brown fell into my hands, and it opened my eyes.

In April 2021, respecting the law of the USA, and personally seeking a peaceful atmosphere to deliver my kid, I flew back to Ukraine before my visa expired.

In June 2021, when I was in my 8th month of pregnancy, a private investigator delivered me divorce papers. In these documents, my ex-husband stated that he was not the biological father of my child.

The first hearing was scheduled for the same day as my C-section. Thank God it was rescheduled. The interlocutory order, issued in September 2021, obliged me to take the 22+ hours flight to the USA with my (90-120-days-old) baby for the face-to-face DNA test. However, at the second hearing in November 2021, the Judge suggested that we should meet with my ex-husband at some clinic or lab in the EU.

My ex-husband got enough evidence stating that it’s his baby (my son’s DNA profile and my medical records). However, he is not interested in officially revealing the truth. So shortly after the second hearing, he submitted the motion for a summary judgment of his non-paternity meaning that he basically wanted to avoid or sabotage the formal DNA test, to receive a “technical” decree of non-paternity, skip the DNA procedure, and save costs on child support.

My ex-husband aims to become a politician, but here are his loyal ex-wife and his own son in the way of his political future. He abused us too much, and now he’s afraid that this story may negatively impact him and his dream. So he not only lied but acted dishonestly in secret.

He sealed the divorce/paternity case which he initiated just days after filing our joint tax return, lied in pleading papers, manipulated facts, violated my rights by blocking the Ukrainian Consul’s access to the hearings, and intentionally exaggerated the cost of the case so that I won’t be able to protect myself anymore.

The Ukrainian Ministry of Foreign Affairs and the Ukrainian Consulate in San Francisco filed an official protest to the Department of State. In order to protect me against offensive and untruthful accusations, I needed to appeal. The case was already called an example of “shocking xenophobia and overt discrimination”. (Please, see the case on the site of the Supreme Court of Nevada here, click on 21-37159 to download the Petition. Supportive documents associated with the case in the District Court of Clark County, NV, are available under 21-37161 and 21-37162 on the same page).

In order to be a “good guy” for his voters, my ex-husband needs to portray me as a “bad lady.” To do so, he stated to the Court that I conceived my baby with someone else to "make him marry me" and "aimed" to receive a green card in a fraudulent way.

These are ABSOLUTE LIES. It’s his baby. There was no fraud. There was love. And a betrayal. By him.

He defames me by using the shameful image of a “Ukrainian whore” to destroy my reputation as a cultural diplomat of my nation – a highly respected person with deep faith, Christian values, and morals. He constantly offends me, my family, and the country of Ukraine in the pleading documents.

Taking advantage of his professional skills as a former prosecutor, he uses the current divorce/paternity case to fabricate a criminal case against me.

My one and only power against all his brutal and offensive accusations is the truth. We need to pass the DNA test which will officially reveal his paternity and ruin his lies.

Recently, on February 22, 2022, at the third hearing, the Court ordered us to do the DNA testing locally (USA / Ukraine) taking into account a very tense political situation in Ukraine and a very high life risk of travel for single mother with an infant.

Just 26 hours after that, the Russian army invaded my native country bringing a tragedy - war, ecological and demographical catastrophes, and genocide of the Ukrainian nation.

This divorce/paternity case, in which I’ve been involved for almost 11 months already, drained all my family’s funds and savings. Both, this case and the war left me with no sources for living with an infant on my hands.

As of today, the amount paid to the lawyers already exceeded $40,000. With this money, I could have lived my humble life in Ukraine with my kid for at least 2,5 years. We could have definitely revealed my ex-husband’s paternity by means of passing a DNA test long ago without spending so much time and money if there won’t been my ex-husband’s will to make the process as long and as offensive as possible.

I signed a $0 prenup to prove that his money wasn’t my reason to marry him. I’ll never have any rights for alimony, heritage, never will benefit from his life insurance, properties, or anything else. He didn’t ever support me or our baby financially – neither before, nor after I left for Ukraine. I covered all pregnancy and baby-related expenses out-of-pocket while he bought 7 properties during 2021.

War is a terrible thing. I wish my family would never experience one...

Now I stay with my little son and senior parents in Ukraine, away from my native beautiful Kyiv while other cities are being demolished by Russian bombs and rockets.

Ukraine fights against the lies of Putin, and I fight against my ex-husband's lies.

I stand for fair justice, for my baby boy’s future, for my good name, and for our chance for a normal life.

I did nothing wrong to be treated this way. I only had an illusory dream of having a happy family with a man whom I loved, but I was mistaken in choosing a life partner.

Ukraine did nothing wrong to be bombed. Its bad luck is just one psychopath's desire to capture it no matter what.

I have no other choice rather than to ask for your help. If you can’t donate, please, forward this link to others.

My little son and I believe in the Lord’s mercy.

We are grateful for your support and truly hope for miracles.

How can I donate if I'm located outside of the USA?

I deeply appreciate your desire to help!

- If you're located in Ukraine you may send your donations in UAH to:

- In case you're outside of the USA or Ukraine, please, use Western Union, MoneyGram, or Ria (some charges may apply) to donate to Olena Karpenko, Ukraine. To complete a transfer of this kind, please, CONTACT me in order to provide the transaction code.

Is this story even real? 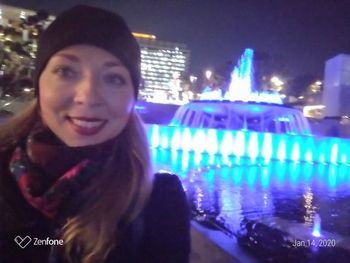 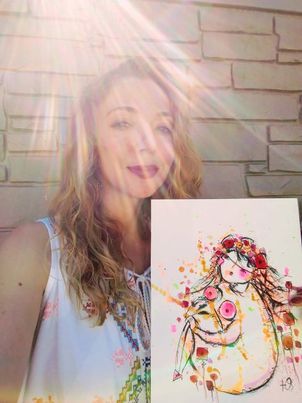 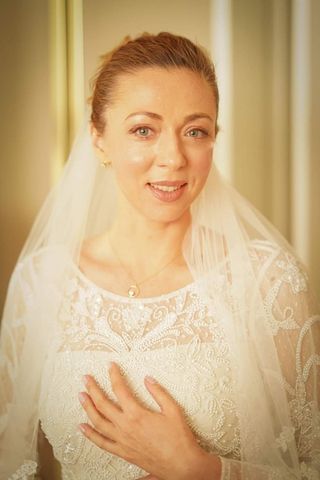 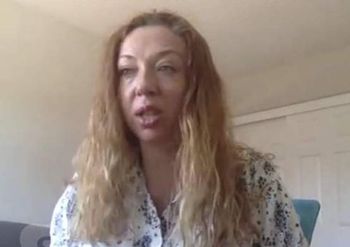 March 29, 2021. An occasional photo which my 5 y.o. student took by mistake during our online class. I'm 5 months pregnant and depressed, just 11 days before leaving to Ukraine.